Heroic ride for Hesjedal today in Stage 3 of the Tour de France. He gutted out an amazing 4th place over the dangerous Paris-Roubaix cobblestones. As if it wasn’t impressive enough that he led most of the way through the race, when he was pinned back by the chase group of Cancellera, Schleck, and Norwegian sprinting star Thor Hushovd, he didn’t crack. He hung on their tails for the final 9km and actually led out the sprint to close out the race. Truly impressive ride.

This entry was posted in sport and tagged cycling, hesjedal, tour de france.

Big results coming in from Canadian cyclists around the globe. The photo below is courtesy of Garmin-Transitions Pro Cycling Team’s flickr photostream. Throughout the racing and training seasons they post great new photos of their riders.

Did you know Ryder Hesjedal of Victoria, B.C., raced to second place April 19 at the 257-kilometre Amstel Gold Race, one of the three prestigious races of the famous Ardennes Classics? That’s one podium place better than local great Steve Bauer ever achieved, and equal to Lance Armstrong’s best result there. 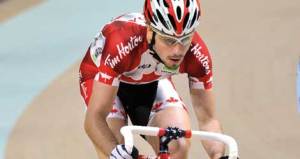 Following the Trinidad Beacon Cycling Festival, where our Canadian track racing team won numerous podium positions, cycling reporter Daniele Defranceschi stated: “The people in Trinidad (international racers) are saying this is the best they have seen Canadians ride …… since the days of Gord Singleton. A very nice compliment indeed.”

I could go on for pages with success stories Canadian cyclists have accumulated already in 2010.

Talk of Victoria’s Ryder Hesjedal being moved up from support rider to more of an attacking role because of his success this past season.

VICTORIA — Victoria cyclist Ryder Hesjedal wasn’t expecting to take such a long route to the podium Sunday in the prestigious Amstel Gold race at Valkenburg, Netherlands.

With the Icelandic volcano curtailing flights over northern Europe, he was forced to drive 1,300 kilometres from his Garmin-Transitions team’s base in Girona, Spain, to Valkenburg, located near the Dutch border with Germany.

So a scuttled one-and-a-half-hour hop by plane became a 13-hour car ride.

But it was worth it as Hesjedal placed second in the 257-kilometre race in six hours 22 minutes 56 seconds. He was just two seconds behind winner Philippe Gilbert of Belgium with Enrico Gasparotto of Italy third.

“It’s unbelievable to be second in one of the top races on the calendar,” said Hesjedal, by phone Monday from the Netherlands.

“This is among the top of the classic one-day races and it’s like a dream to be on the podium.”

The silver medal may have been tempered by the fact 13 of the 192 scheduled racers couldn’t make it to the race because of the European no-fly situation — including Lance Armstrong, Fabian Cancellara, Bradley Wiggins, Carlos Sastre and Alejandro Valverde — but you can only race against who is there and there is no diminishing what Hesjedal achieved.

Several cycling commentators are predicting Hesjedal to be elevated from support rider to more of an attacking role with the Garmin-Transitions team.

“It takes time to make an impact in pro cycling and things are going well in that regard,” said the 29-year-old Hesjedal.

This entry was posted in sport and tagged amstel gold, cycling, hesjedal, silver.

Just heard about this. A major achievement by Ryder Hesjedal from about 10 days ago. Congrats to Ryder. Better late than never!

VICTORIA — Ryder Hesjedal of Victoria continued his frenetic foray into the elite circles of professional road cycling Friday by becoming the first Canadian in history to win a stage on the Tour of Spain.

In taking the rugged 12th stage through the Sierra Madres, he also became only the second Canadian rider to win a stage in a Grand Tour event, following Steve Bauer of Fenwick, Ont., in the 1988 Tour de France.

“Stage victories are always remembered and respected in cycling and this win will be with me forever,” Hesjedal said in a phone interview from Spain, where he is competing in the 64th Tour of Spain, also known as the Vuelta.

This entry was posted in sport and tagged 12th stage, cycling, hesjedal, tour of spain.

Roman Kreuziger of the Czech Republic was second, Mickael Delage of France was third and Peter Velits of Slovakia finished fourth.

Hesjedal one stage away from the Champs-Élysées

VICTORIA — After nearly 88 hours of pedalling, 3,500 hard kilometres under a relentless sun and three crashes, Ryder Hesjedal of Victoria will ride down Paris’s famed Champs-Elysees on Sunday to end his second Tour de France.

“It’s hard to put into words, but coming down the Champs is the magic moment every cyclist dreams of,” Hesjedal said Saturday from France.

“The Champs will be crazy with all the people and atmosphere. It’s a truly significant moment in the career of any cyclist and I’m looking forward to it.”

Until last year’s race, no Canadian cyclist had experienced that rush for more than a decade.

“It will be hard to beat the memory of the first time I did it (2008),” said two-time Olympian, only the fourth Canadian ever to ride in the Tour.

“Nothing compares with the first time. But returning to do it again for the second time is hugely satisfying on a whole different level. I’ve shown I belong in this race at this level.”

END_OF_DOCUMENT_TOKEN_TO_BE_REPLACED

No details so far but it looks like Ryder lost over 20 minutes to the leaders today on Stage 16. He, Julian Dean, and David Millar finished together, 20’39” behind.

The top of the Garmin roster had a good day, so it looks like Ryder spent most of his day as a domestique, putting his teammates in good position on the stage: Bradley Wiggins and Christian van de Velde finished together, only 59″ back, alongside Kloden, Armstrong, Contador, Sastre, and the Schleck brothers.

Armstrong: “the only way to describe days like today is scary”. 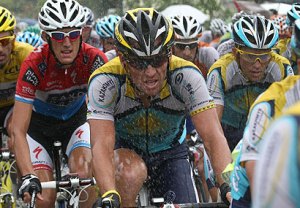 “There are not many days when I have regretted my decision,” he said. “But maybe that was one of them.

“Maybe I’m being facetious, but it wasn’t a lot of fun. There were dangerous downhills and some crashes. The only way to describe days like today is scary.”

Looks like Ryder Hesjedal got involved in a couple of mishaps today, dropping from 21st overall to 25th. I hope he’s ready and fit for the first mountain stage tomorrow …

The Tour’s early entrance into the mountains will be sudden, with a Level 1 mountain pass and one of the highest finishes in its history, at 2,200m elevation. And yet this will not be the time for great manœuvres. The fact that difficulties will be spread out throughout the race, as well as the length of the first Pyrenees stage, should enable a bold, sturdy climber who breaks away from the pack early to seize his chance at Arcalis.